Anybody else REALLY wish the super bowl had been on a Saturday?  I don’t know about you but I am wiped out.  So I thought I would find a little photo pick me up to go along with your caffeinated (or non) beverage of choice this morning.

But you have to promise you won’t get too mushy on me…….

Because what I am about to show you may provoke a big fat “awwwwwwwwww”……. 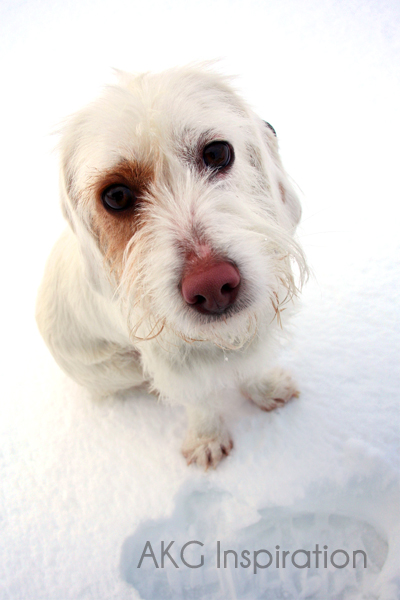 A Beagle/Jack Russel Terrier mix.  He came to Braveheart Kennels for training.  He mainly came to us because his owners were concerned due to him using his teeth inappropriately, and they have kids.  But all this cute ball of energy needed was a little guidance and leadership.  He took to training REALLY well and is now quite the model student, calm and responsive.  I took him out in the snow one day and he had me cracking up as I attempted to capture his antics with my camera.  Sadly I don’t have many good shots of him, but will keep them as a record for that day. (He was a contributing factor to me thinking more about getting a camera that can better handle all the dog shooting I do)  I thought he might not like the snow due to him being small, but he LOVED it.  It brought out the terrier side of him as he ran around and investigated my footprints/boot holes.  He would tear off across the snow, but would bust through the snow every couple bounds so he then would attack the snow. it was pretty hilarious to watch.  He has since gone home, but hopefully we’ll see him back for boarding and I can (hopefully) get better pics of him with my new Canon 7D.

(PS. does anyone else ever have trouble linking words in their wordpress posts? It often will glitch with the link window when I try and paste it into the field.  And it will instead post the actual address in my post… weird)

I am a native of Virginia but recently relocated to Maryland I often feel I am simply a visitor... here to take note of little things people often pass by... I enjoy photography, family, the outdoors, reading, my vizsla... etc etc
View all posts by Anna →
This entry was posted in Animals, photography, Random bits and tagged akg inspiration, beagle, braveheart kennels, Canon 7D, dog, dog training, jack russel terrier, pet, photography, point of rocks, snow, winter. Bookmark the permalink.